I took the day and traveled to Toronto with Louise Smith to attend a press conference and join in on a walk for SMA.

You may know that we have been fundraising through the Rebecca Run for Spinal Muscular Atrophy for 18 years to find a cure for spinal muscular atrophy. Glenis and I have been volunteering with race director Louise Smith since the race was in the planning stage.

Although a cure hasn’t been found, a drug that can help slow the progression and in some cases give back abilities has been found and is in production. Although extremely expensive, to the point that basically no family can afford it, 43 countries and the province of Quebec have approved it for all SMA patients. Canada with the exception of Quebec has said no to all SMA patients. Only patients 12 years old and under who have never walked or are not intubated qualify. That leaves out children over the age of 12 and adults without access to this life altering, potentially life saving drug.

I saw the pain in the parents’ eyes as they pleaded for their older children. These young adults worry about their parents just as their parents worry about them. To hear the university students explain how they manage living on their own, manage classes and manage their disability was astounding. How can Canada make a decision that will make it more difficult for them than it already is? Is it the cost? Are we not all worthy?

I can’t comprehend Canada’s decision, but I will be there to help wherever I can to convince them to change their decision. Join us.

The Rebecca Run for Spinal Muscular Atrophy is on July 6th at Fairy Lake in Newmarket, Ontario. I hope I see you there.

The farm is a beautiful set up for their herd. I had a great talk with the owners on building the farm, the herd and Alpaca husbandry.

There went my goal of not adding to the yarn stash! I learned so much about raising alpacas there just might be a second career! 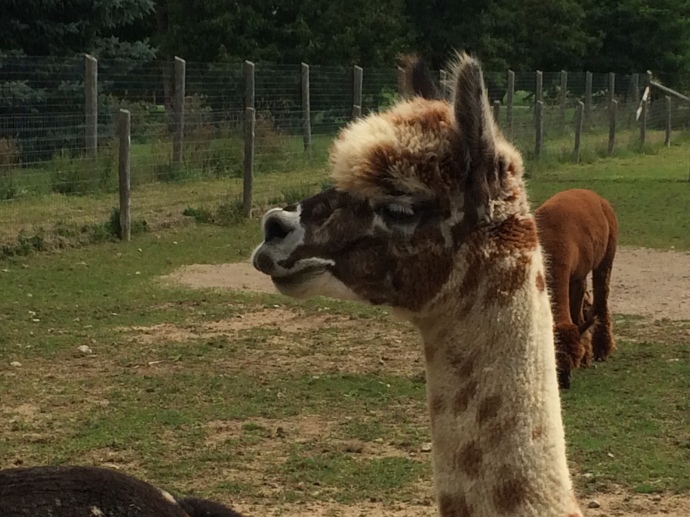 Glenis and I joined in a sweet little Fun Run put on by OUTRace – Ontario Ultra and Trail Run Series over by Creemore on Saturday. It was great! About 35 runners out for a lark on a sweet little 7.5k loop. The idea was to do 4 loops in 6 hours or as far as you wanted to go.

The course was challenging, with steep slippery up hill climbs on ATV trails, grass cover trails along alfalfa fields, slick down hills on single tracks and a couple of river crossings. It also had the BEST gentle down hill run ever on the back half. Oh ya and it rained a bit just to add to the best fun on a trail run!

No points were awarded for this run but they had awesome awards at the end and everyone got a 30th Anniversary OUTRace toque just for showing up.

Today I volunteered at the Rebecca Run for Spinal Muscular Atrophy. The run has been hosted in Newmarket for the last 17 years. I’ve volunteered for 16 of those years, the race just keeps growing.

As always it was a beautiful morning of running, walking, families and adorable kids. The day featured a timed 5k, a 3k run /walk and a 1k kids run. There was something for every ability and the kids show you how to get it done. Hats off to Corey and her team for another great event and to Louise for starting it all! 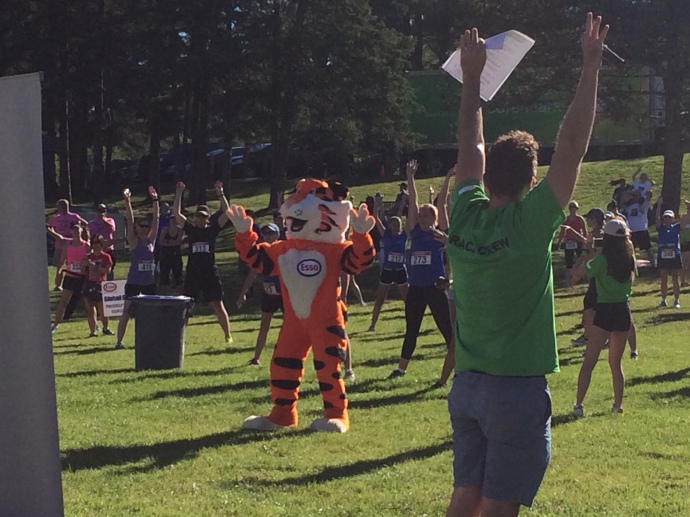 Today $115,000 was raised for research to find a cure. A gene therapy cure is so close but more research funds are needed to make this cure a reality. So many kids are waiting. Check out the website.

Last year was a bit of a bust for the Sisters but we are recovered, home, healthy and ready to go this year.

We’ve been planning our season and our training for this year. We are excited to get started with Raid the Rib in two weeks down near Niagara on the Lake.

Now that the weather has finally decided to cooperated we got some miles in on the bike today! 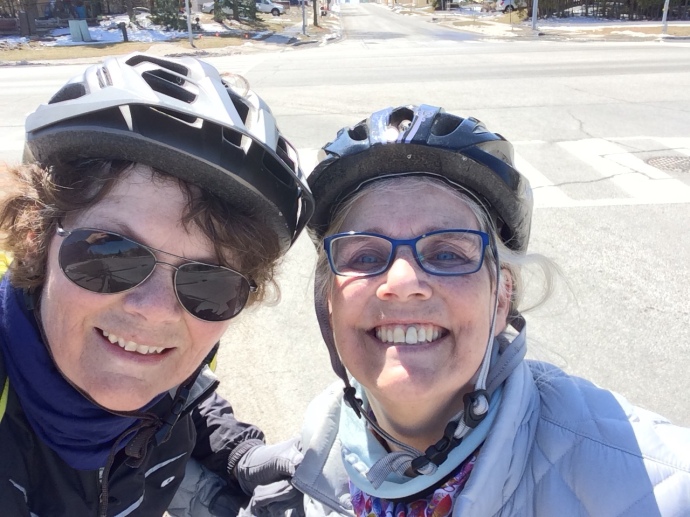 Sunday morning Glenis ran the UKFAST UKFAST WE LOVE MANCHESTER 10K. That lucky girl is visiting the UK for a few weeks and decided she better run a little bit while she is there!

“The UKFast We Love Manchester 10k is known for its fast route and friendly atmosphere as well as its popularity in the region – commonly known as ‘the peoples race’. We welcome runners of all abilities, in this the perfect 10k event to beat your personal best, meet other runners and to raise money for charity, with over 3,000 entrants in 2016” according to their website.

It sounds like it was a lot of fun. She said it was a really hot day but I know Glenis, she loves the heat she would have been grinning ear to ear!

Glenis is having a great time visiting the UK, she has even taken a side trip to Spain.

I wish I was over there to run with my sister, and cheer her on. I know she missed me trotting by her side. She did send over a few pictures of her accomplishment!

What every gal needs is a time to hang out with her running friends, which usually are her best friends! We had a wonder 23 hours with our closest running friends. The four of us got together during our marathons days years ago, so it was great to get together to reminisce, catch up with each other and to plan another adventure.

The last adventure we had was a little mountain climbing last year in the Adirondacks. After a lot of laughter this years plans are well under way for another great adventure.

A little hiking, a lot of laughing, love these girls!

Friday morning, the end to a long week. One more day to work for me, Glennie gets to lounge around today. Off we go into the woods on our bikes. Really the first time on the trials for us other than riding the “urban” trail that takes us into town.

When we came out of the bush we interrupted a flock of turkey vultures. Glenis counted 15 of them. All hanging around in the trees, spreading their wings to warm up while they waited for us to leave. It’s garbage day and they were waiting to swoop down for breakfast! 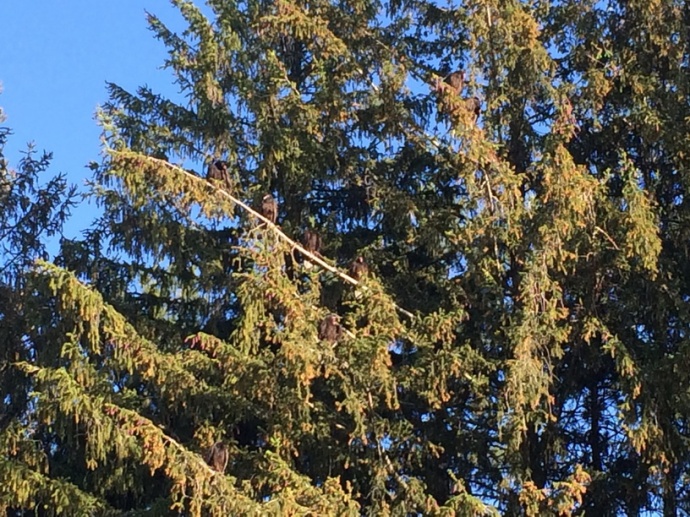 Count them – 8 turkey vultures sitting in a tree! 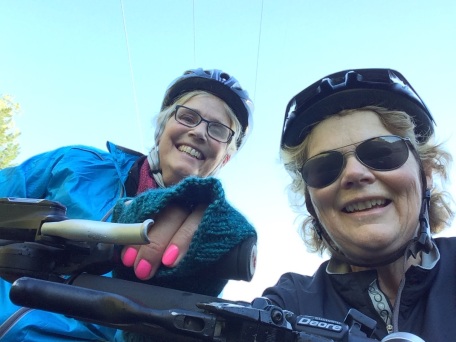 The tap in the middle on nowhere that is always running!

Had to take a picture of two friends!

So nice! Until that rock crashed into Glennie’s knee…. The first boo- boo of the season!

Ouch, first crash of the season!

Still, it was a pretty awesome Friday morning in June! I wonder if she will ride again. HAHA, of course she will! On to day 3 of 150!

Why not snowshoe before work?

We were really luck the last few days to get a dump of snow. So this morning before work we headed out for a little snowshoeing. It’s a lot of fun and it’s a work out too. You can really feel it in your hips and glutes. The valley looked so peaceful covered with snow as we stomped along. We cut a trail along the river.  The river isn’t frozen over now, too many above freezing days, so the ducks were still there, I can’t figure out why their feet don’t freeze in the water but that’s for another post.

I’ve been snowshoeing off and on for a long time. I still have the first pair of snowshoes I bought when I was a kid on the farm from the local feed store. They are the older wooden kind with a tail and the cat-gut webbing. I bought them so I could check on the fence around the field my horses were in. Working snowshoes.

Now we have the light-weight aluminum and nylon snowshoes. They have comfortable bindings and are light enough that we can run in them (although they aren’t made for running). No more special snowshoe shoes, we just use our trail runners and gaiters.

Snowshoes go back a long way. Historians don’t know the exact age of snowshoes but they believe they were invented 4000 to 6000 years ago. They say that North America wouldn’t have been populated without the snowshoe.  Wikipedia had a pretty good write up about the history of the snowshoe. Did you know that snowshoes are a Canadian Icon ? If it weren’t for snowshoes the fur trade might not have happened back when the Hudson Bay Company was in that business. 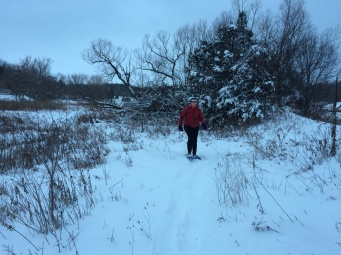 There are lots of different types of snowshoes depending on the terrain you are in and what exactly you want to do with them like running or back country hiking. Choosing a snowshoe can be as easy as going to your local sports store, farm store or Costco but a little knowledge goes a long way, check out Backcountry’s website.

Snowshoes are getting more technical too,  Fimbulvetr, a Norwegian company has some pretty cool technical snowshoes. They made the Outside (online) 2016 Winter Buyer’s Guide. 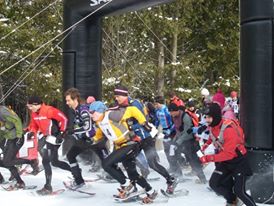 We are not in this group!

Hard to believe it’s the middle of January already! Winter is here and the trails are great even after a few thaws.

We ventured on to the trails at Ravenshoe this morning and had a great time. The fat bikes have been out so the trails were smooth and it was cold enough that the snow was set and we didn’t do any damage running on them . It was a little icy in patches but our screw shoes kept us upright! We always have a laugh at Ravenshoe, you never know what your going to find in that little wood lot! 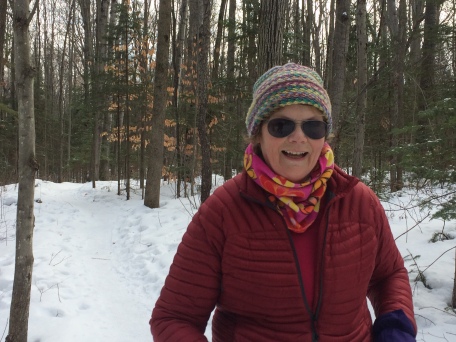 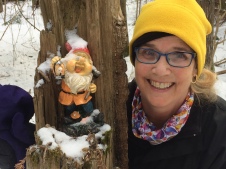 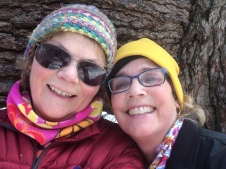 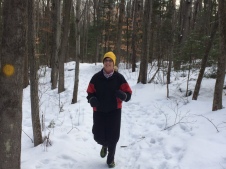