Glenis has a beautiful Canadian flag flying in front of her house this week because tomorrow is Canada Day, the day we celebrate the tremendous privilege it is to live in Canada and the opportunities it brings to us.

The Canadian Flag a symbol of Canada that is recognized all over the world. A lot of Canadians don’t know how the Canadian flag came to be the brilliant red and white with the maple leaf. It was chosen from 100’s designs submitted to a parliamentary committee that was tasked with selecting our new flag.  It took them years to narrow the selection down to 3, a Red Ensign with the fleur-de-lis and the Union Jack, a design incorporating three red maple leaves, and a red flag with a single, stylized red maple leaf on a white square.

“The flag is the symbol of the nation’s unity, for it, beyond any doubt, represents all the citizens of Canada without distinction of race, language, belief or opinion.” Honourable Maurice Bourget, Speaker of the Senate Feb. 15, 1965 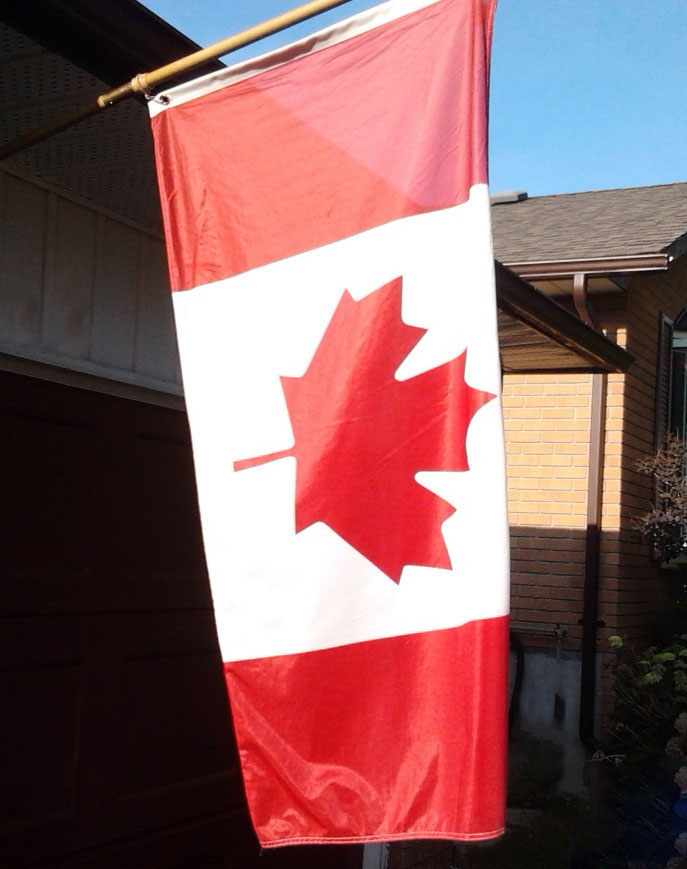 The National Flag of Canada was approved by Parliament in 1964 and proclaimed by Her Majesty Queen Elizabeth II to take effect on February 15, 1965. It is a red flag, twice as long as it is wide, containing in its centre a white square bearing a red maple leaf. Red and white are Canada’s official colours and, with the maple leaf, are the symbolic elements found in the Canadian flag. – http://www.pch.gc.ca

There is a lot more information about our flag on our government website, like the rules on how to respectfully fly a flag, and why we ended up with the 11 pointed maple leaf on the flag.

Its a hot day and Glenis has to work, but never fear, I’ll ride down to hang out with her for a while. 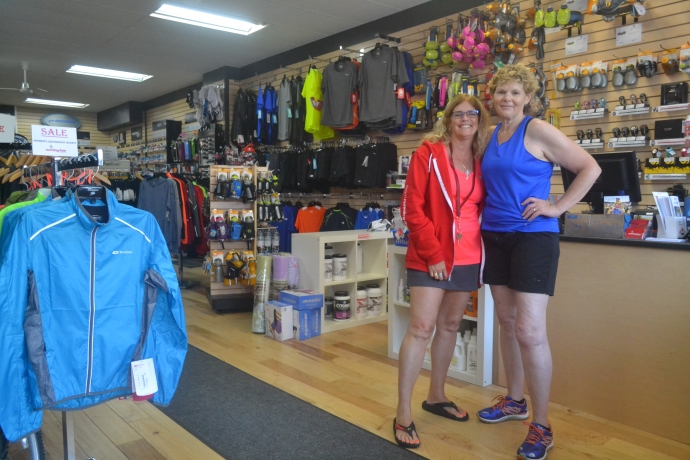 Phil and I rode to the store to hang out with Glenis.

It had to be about 28C when we started out on our long run this morning. Beautiful. The darn deer flies were just waiting for us, but we didn’t let them get to us. 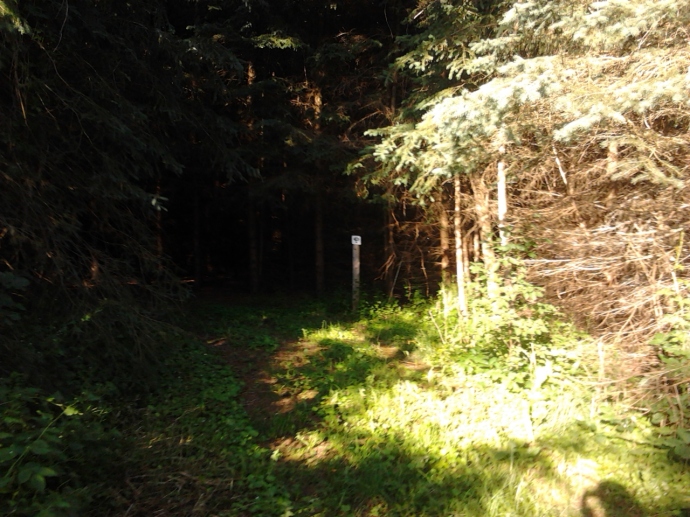 You can’t see them very well, but we were the first ones through the trail at 7am this morning, the the webs covered the entrance to the trail.

We had a great run then headed to Booster Juice for a recovery smoothy and then to soak our feet in the pool. Nice. 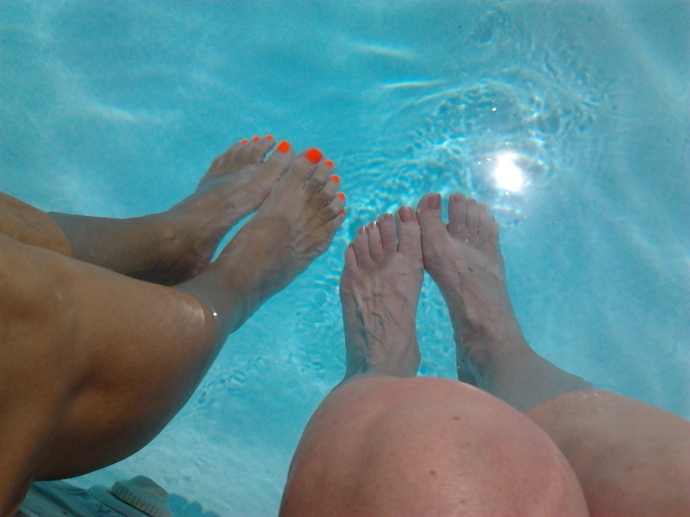 It feels so good to plunge our feet into cold water after our hot run.

6:30 in the morning on a Friday before the “long” Canada Day weekend. There could be no better day to call our husbands out of bed to cross-train with us on the tennis court!

Of course none of us know how to play tennis other than that you use a racket to hit a yellow ball over the net somewhere in the vicinity of your opponent. We have a dozen tennis balls and about half of them bounce, we also only have tree tennis rackets, but we do have one squash racket that seemed to do the trick.

All of us have either sore shoulder or knees. I’m sure we were quite a sight, hobbling around the court and grimacing in pain after the occasional wrenching swing. It’s a good thing that most of the neighbors around the court were still asleep. All except the tennis instructor who showed up with a student. Our balls were flying everywhere but he polity hit them back to us and let us know that his balls had green dots on them so they couldn’t be confused with ours (despite that ours didn’t bounce). Somehow they managed to keep their 50 or so balls with the green dots in their court, ours just had minds of their own and traveled everywhere.

After swing and missing, chasing balls for an hour and laughing a lot, it was back to the house for coffee and ice packs. Thanks guys, for coming out to play. 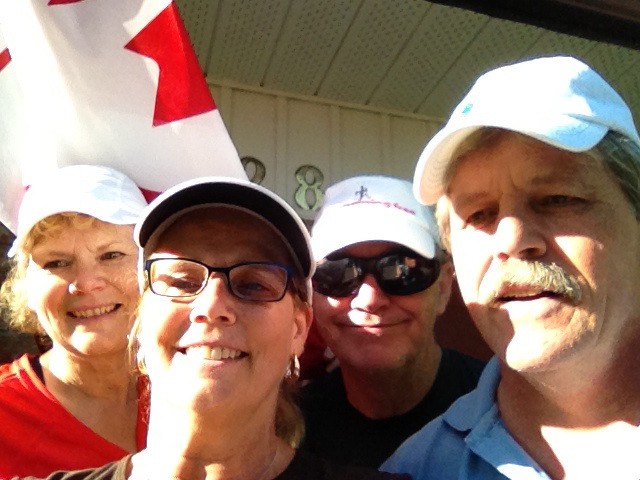 A great start to Day 43 and the holiday weekend!

Finding time to run is always a challenge between work and family obligations. Runnng home from work is one way to fit in a few extra miles.

Lucky for us the way home takes us on the Nokiidaa Trail.

Every Trail discribes the trail as:
Stretching 35 km when completed, from the Oak Ridges Moraine in Aurora to Newmarket and to Holland Landing, the Nokiidaa Trail system is a project undertaken by the Town of Aurora, Newmarket, and Holland Landing of East Gwillimbury in York Region to connect three communities’ town parks, green spaces and wetlands along the East Holland River. 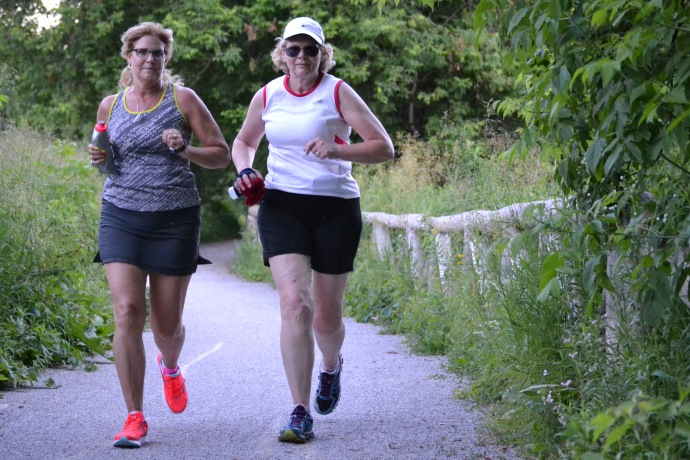 The Blister Sisters Running home on the Nokiidaa Trail

#100happydays Day 41 The Rockstar is coming!

#100happydays Day 41 The Rockstar is coming!

The Rockstar Adventure race is our all time favorite race, and it’s only a month away. If we can’t run it (injury is the only reason we would miss being a participant) we volunteer at it. This year injury is getting in the way again so we’ll be out on the course cheering people on, helping Sean by making our CP run smoothly and hopefully the runners will have a great time too. Everyone who is planning to do the stand up paddle board CP should look for us. 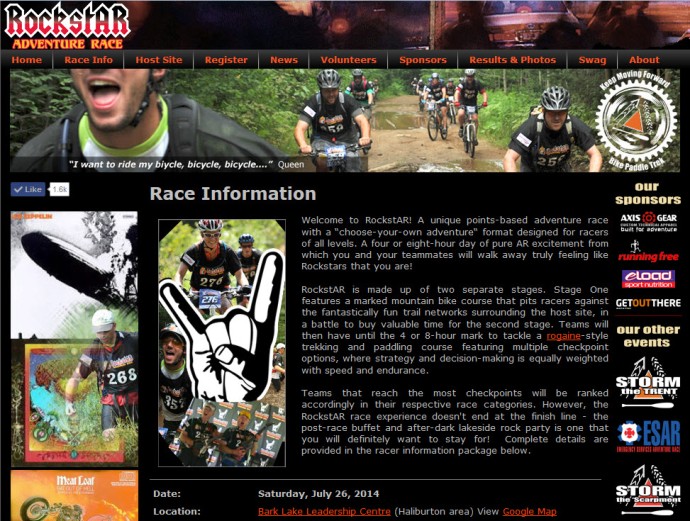 The Rockstar is an unique points-based adventure race with a “choose-your-own adventure“ format designed for racers of all levels.the Route is unmarked once you are off your bike, so you can spend 4 hours or 8 hours navigating around the bush or paddling in Bark Lake. Once you are done they have a great after party.

If you have ever wanted to try an adventure race or if you are pretty good at them, this is the one to do. As of today they still have room for extra teams. Click on one of the links in this post to find out more.

This morning’s run started off in a warm drizzle. We decided to do one of our usual routes backwards. We always chuckle to ourselves how running a trail backwards looks like a whole new trail; it can be much the same for a road run. The route takes us by some pretty homes along the river on a quite road that eventually runs out of sidewalk. Near the end of the road we were looking around at the damage a recent storm inflected on some of the properties when we spied a little “house” on a fence post sitting at the end of a drive way. In all our times running by this spot we had never noticed this little house. It was obvious that it had been there a while so we just had to investigate.

Wow, it was a Little Free Library, take a book; return a book! We didn’t even know there was one in our town, how cool is that! 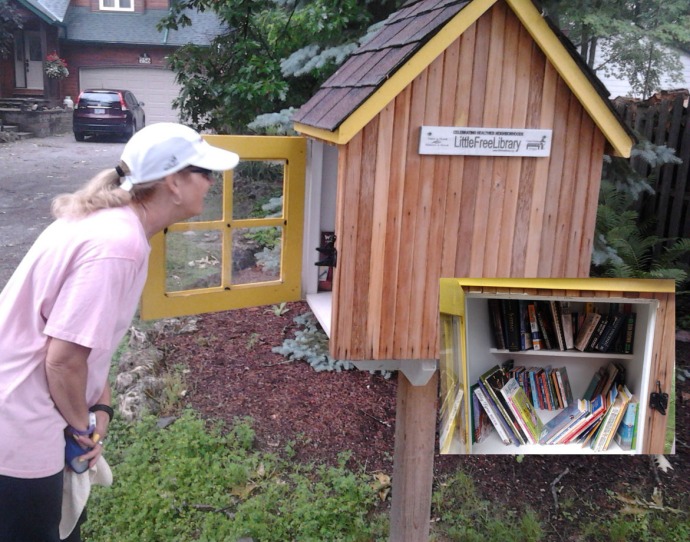 Having a peek inside this cute little library full of books!

I found out a little more about the little free library at littlefreelibrary.org. What a great concept. You can find these cute little book houses throughout the US and Canada. I can’t believe we haven’t seen one before! Check it out, you might find one in your neighborhood! 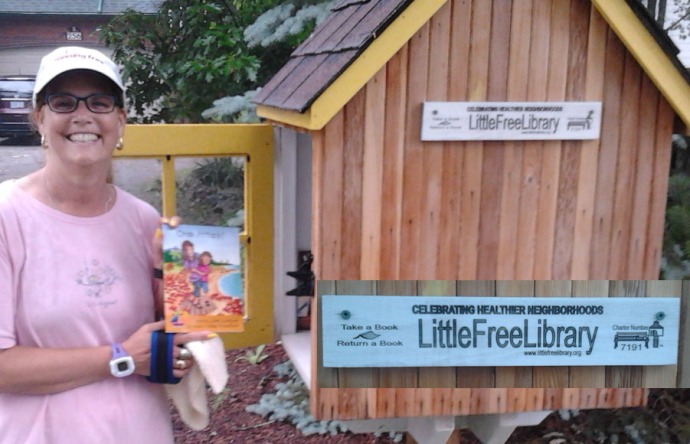 We found inside both adult and children’s books, a little library for everyone!
Take a book; Return a book

We are just looking through the photos my husband took at ESAR. (Storm Events)

We had such a good time manning CP2. There were so many great teams of police, fire, EMS, military and civilians. Everyone was putting in a great effort and they still thanked us for volunteering. (‘Cause after all these races wouldn’t run very well with out volunteers).

Here is a link to the photos at philjarvis.ca.

We are so lucky to have a strong, active, fun running community. Ever one has different abilities and goals, some run, some do tri’s and others like us have moved in to adventure racing. All of us appreciate each others talents. 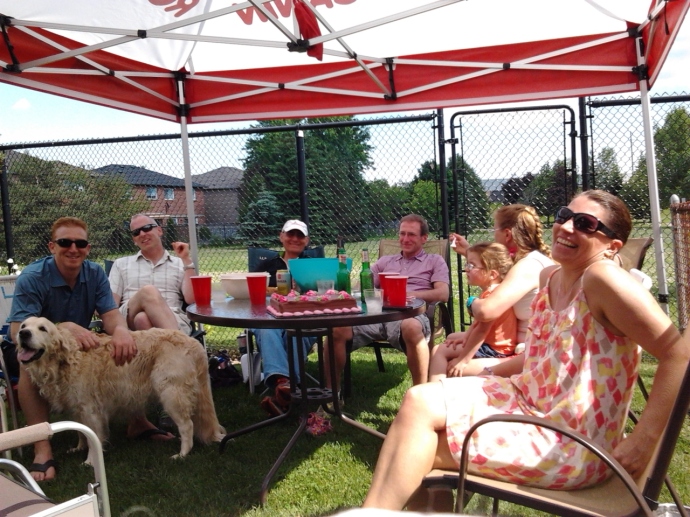 Today we had a non-running get together to celebrate on of our own who is  moving away to start a new adventure. We are going to miss her but hey, now we have a great excuse to visit her new home and go for a run! We wish her all the best!

We had a great run this morning at Scanlon Creek. We have a nice 5k route there and pulled off a sweet 20k before 10am.

We were wondering what all the activity was about in the parking lot and found out it was volunteer day. Scanlon hosts a day for park users and others to come out and lend a hand in maintaining and upgrading the trails and for general clean up. You can find out more on their Facebook page.

The park is always very clean and well maintained, kudos to all the hard working staff and volunteers. 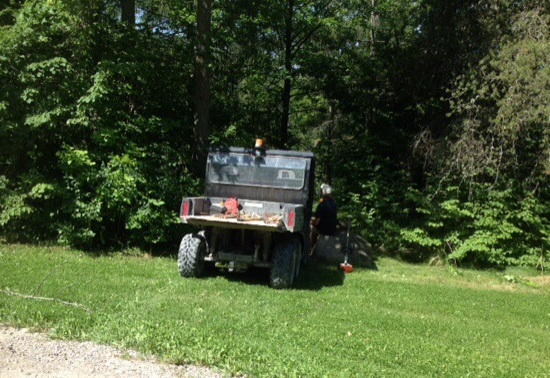 Volunteers working one the trails at Scanlon Creek