This post is a little late but the Blister Sisters were at it again in the Rockstar Adventure Race that was held on July 25th at Bark Lake. I think that was the 7th time we have done this race and we still love it. Race director Sean Roper does an excellent job keeping this race fresh and keeping racing teams guessing.

The rain clouds were out at sun up.

After a grueling 25k mountain bike ride down rocky, hilly and wet ATV trails and Ontario cottage country backroads, we rolled in to the trek and paddle portion of the course. We chose to trek first and saved the paddle for later on in the day. Going forward with our new found but unpracticed compass skills we felt positive that we would find this new course a breeze and that controls would appear right where our compass pointed us. 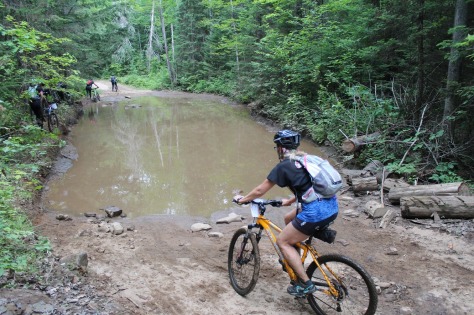 A little mud does a bike good, right?

Sometimes you just have to hide a bike, or in this case we could have paddled! 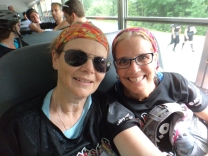 On the bus getting driven out to our bikes and the start of the race.
He he, not so! The first control was the paddle board. Glenis did an outstanding job of getting through that task quickly. Then we moved on to an over grown trail to find 2 more controls. That’s when the trouble started. Its all fine to know what direction to go but the problem was we didn’t really know how far to go in that direction. That’s a skill we haven’t mastered.
After wandering and back tracking on an all but non-existence trail, having not seen a sole for what seemed like hours, we stumbled on a control. We were back in business.
With our new found sense of accomplishment we trotted off to the next control by a beaver dam. Success! After looking at the map and our compass we stumbled across the dam to bushwhack to the next target. 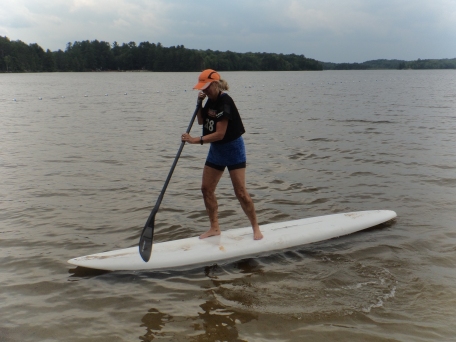 Off
We hacked and stumbled through the dense undergrowth, pausing to take readings with our compass to stay on track only to find ourselves at the edge of a large marsh. Once again we need to back track, through that bush that has probably never seen a human. We took a reading that should have intersected with a trail only to find ourselves back at the beaver dam. We probably couldn’t have done that if we planned to end up there. So we tripped back across the dam and onto a trail. At this point we decided to chuck the compass and go back to just reading the map. Apparently we need a lot more practice before we rely on a compass to get us anywhere.

Glenis is on the hunt

The storm is rolling in
Sticking to a trail we found the next control. Then we waded through a creek and onto to an old ATV trail. We planned to hit a control on the edge of a large marsh. Fortunately for us, other racers had already been there ahead of us so a path around the marsh was already stomped out in the long grasses and through the bracken waters. It seemed like quite a hike only because there were storm clouds gathering all around us. It had been raining on an off but usually after a brief shower the sun came out. This was looking a little more ominous.
Our joy of finding the control was seriously hampered by the huge storm that blew in as we stood planning our next move. We were nearly blown off our feet, the temperature dropped and the rain pelted us sideways. We hustled up into the bush and contemplated our escape. The decision was to go back the way we had come in along the marsh, in the rain and lightning, bushwhacking wasn’t an option. The rain was pelting down in buckets, we were soaked through. We didn’t give it a second thought when we waded through the rushing creek that drained the marsh and climbed onto an ATV trail. The trail had a stream running down through the middle of it but strangely it was the nicest run of the day.
Time was running out but we decided on finding one more control. A sound control, we had to find it by listening for a sound in the forest. No easy task with the rain pelting down. Once again we over shot where it was supposed to be, but on the way back the rain had slackened off and we could actually hear the bush. There it was; a rock song,- the Stones I think; playing in the bush. Off we charged and Glenis ran forward to punch the control. Next thing I know she is yelping and holding her butt, she had disturbed some ground wasps, and one of them got her right on the butt cheek! With her leg going numb we hustled off to the finish line!

The Blister sisters!
Thanks Heather for the Pic!

We never did get in the canoe, every time we thought of paddling the rain came along with lightning and thunder. We did have a great time though. What a rush to be out in the bush wondering what is around the next corner. We will be back next year for sure, hopefully with improved compass skills!