We’ve run for the last time with crampons that fly off when we least expect it. You know how it is out there, the roads and trails are slick, icy, and slushy and you still “need” to run. So you dig out your crampons, those little rubbers with the picks, chains or coils that are supposed to give you a little extra grip. But sure enough either you can’t find one or both of them or within the first kilometer of running in them, they twist or fly off.

We decided, enough is enough, we decided to screw our shoes.

We dug out a pair of worn but not worn out shoes and then stopped at the hardware store for a package of sheet metal screws. We picked up a package of self-starting, ½ inch sheet metal screws. The shoes we picked were old trail shoes but apparently any shoe will do with the exception of shoes with very thin soles like racing flats. Total cost was about $8.00 for 100 screws, enough for a few years. 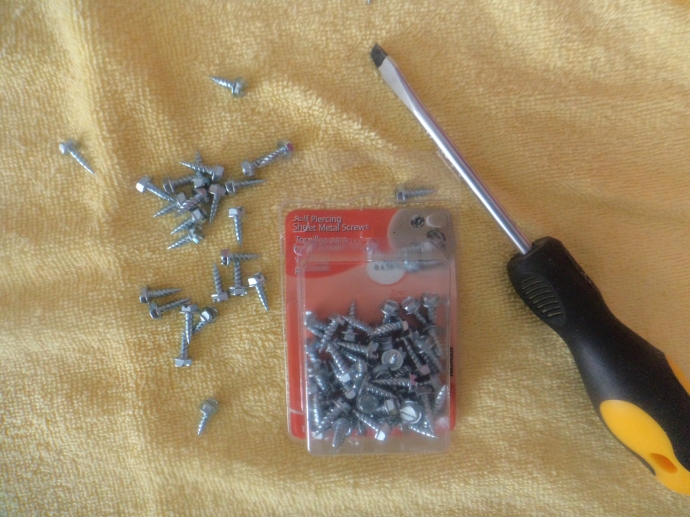 It was really easy to put them in the shoes. All we needed was a flat end screwdriver and a little elbow grease. We put the screws in the raised tread of the shoe. We had no worries about the tip of the screw going right through the sole. We would have to use a longer screw than a ½ inch for that to happen.

When deciding where to add the screws, I had a look at the wear pattern on the shoes.

It took just a few minutes to add the screws.

We did a little investigation on how many to put in (http://www.skyrunner.com/screwshoe.htm, http://www.competitiverunner.com/screwshoes.html) and decided on 11. We didn’t put any in the middle of the shoe; we thought we would give it a go with the screws lining the outer edge of the sole. In total our screws only added ½  ounce to the weight of our shoe, not that we care but that seems to be an issue with some runners.

According to Competitive Runner: You can use Screw Shoes on almost any surface. You won’t notice them on pavement, except for the clicking noise. They work pretty well on ice, as long as you are using new screws and the ice isn’t too hard or thin. They are best on hard-packed snow, but only moderately helpful in deep, slushy snow. We figure any traction is welcome. 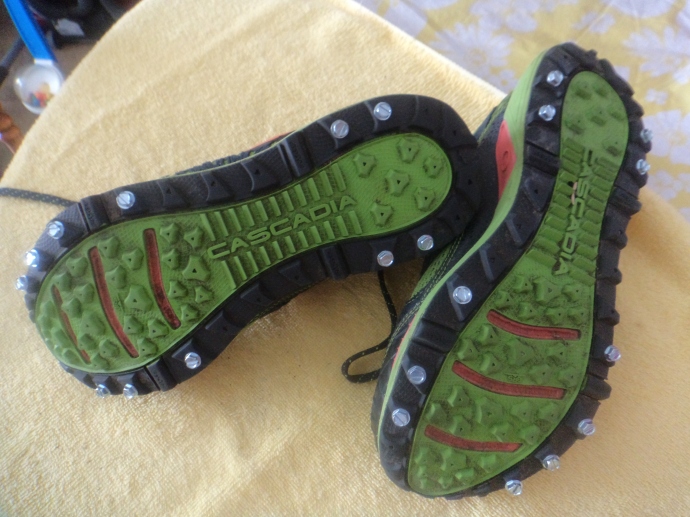 Here is a little update: We ran on snowy, slushy roads and fresh trails this morning and they worked great!