You can tell the fall is coming now. The last few mornings have been dark and foggy. Today was humid too as we patted out our 10k run.

Early morning risers see the fog, usually it is burnt off by the time regular people get up. Fog is a cloud that occurs at the earth’s surface. It consists on tiny water droplets suspended in the air. Mist is similar to fog except it is less dense and generally contains larger water droplets which when heavy enough fall to the ground. That’s why you always feel damper in mist than in fog. 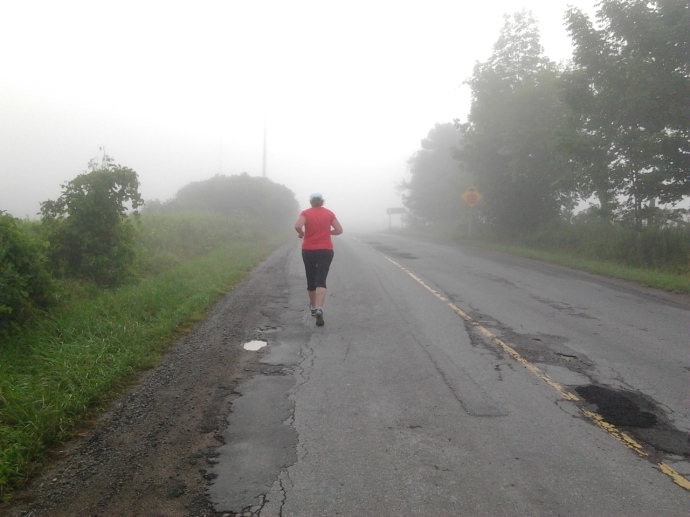 Foggy morning run, you can just see the sun trying to burn through it.

This is what I found out about morning fog:

At night, the heat from the earth radiates back into space. Early in the morning, the temperature is lower near the ground than above. This is called an inversion. When it happens, the warm air doesn’t rise and as the temperature falls below the so-called dew point temperature near the ground, if there is enough humidity in the air, haze and, eventually fog, will form. This is increased in some places like in valleys where the colder air from the surrounding hills falls down in the valley at night. Sometimes it even creates a wind called a katabatic wind. If, in addition, there is a lake or large body of water in the valley, the humidity will be high and so will be the risk of seeing early morning fog. If, in addition, this is an industrial region, pollution will increase the change to see the fog to condense on particles of smoke or dust. (Thanks Yahoo)

This happens mostly when under a high pressure when the air sinks from above and when there is little or no wind. In a windy situation, the air mixes and there is less chance to see fog.

There are different kinds of fog too.

Radiation fog occurs during long, clear nights, typically in autumn, when the land warmed by the sun during the day radiates heat into space. Under relatively calm and humid conditions, the air in contact with the ground can be cooled below its dew point, causing some of the water vapor in the air to condense into fog. This fog tends to develop in valleys and hollows. Radiation fog that extends only a short distance above the ground is called ground fog and is usually dispersed by the morning sun. This is the inversion mentioned about and is what we dealt with this morning.

Advection fog is caused by the movement of a mass of air across the earth’s surface. Such a fog may occur at any time of day and sometimes covers a very large area. Most advection fog develops when warm, moist air rides in over a cold surface—land, ice, or water. A large volume of air is cooled below its dew point, forming a thick blanket of fog that may persist for days, drifting with the wind. Advection fog often develops along seacoasts where warm air comes in contact with cold ocean currents. Noted foggy regions include parts of North and South America’s Pacific coast and the coasts of the northeastern United States, the Atlantic Provinces of Canada, and northwestern Europe. Sometimes advection fog is formed when a mass of air is forced across rising terrain, such as the slope of a mountain. As the air reaches greater elevations, its pressure decreases. The drop in pressure produces a phenomenon called adiabatic cooling, which may sufficiently cool the air to cause its water vapor to begin to condense. Fog that develops in this manner is called upslope fog.

Evaporation fog occurs when the amount of moisture in the air is increased beyond the saturation point by the evaporation of water that is warmer than the air. This process is similar to the condensation of steam rising from a teakettle. Evaporation fog sometimes forms in irregular columns rising from the surface of water; such fog is commonly called steam fog.

Ice fog occurs in severely cold weather. The water vapor in air that has become saturated can form into ice crystals instead of droplets of water. Fog containing ice crystals is relatively rare and generally occurs only in polar regions. In the northwestern United States, ice fog is known as pogonip. (Thanks How Stuff Works)

And that’s your weather report for the day! (Thank you Google)